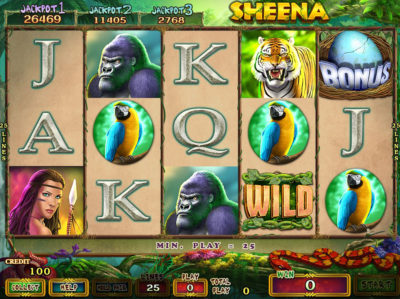 Sheena is a 25 Line game by IGS. It features a Jungle theme with Sheena as the main character. Sheena has many features and an interactive bonus game. 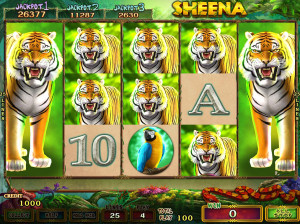 Sheena is a 25 Line game by IGS. It features a Jungle theme with Sheena as the main character. Sheena has many features and an interactive bonus game.

During a game the Wild Sheena feature can be randomly triggered.  Sheena will swing across the screen and change some symbols to Wild symbols to increase the winning chance.

The All the Same feature is triggered when the whole reel symbol on the first and fifth reels are the same.  The same symbols and Wild symbols will be held on the screen and the different symbols will re-spin two times to increase the winning chance.

When two different whole reel symbols appear on the first and fifth reels the Victory feature will begin and the player must choose one side to support.  The sides will then enter a battle.  If the player chooses the correct side the result will be all of the opponent symbols will be replaced by the winners symbols.

If three Bonus symbols appear on the screen, the Bonus game will begin.  The player will have to choose a lotus leaf to move forward and win prizes.  The game ends when Exit is selected.  If Sheena makes it across two screens of lotus leaves the next round of the bonus will start.  The player will have to choose from a group of vines to climb up.  If Exit is picked the Bonus game is over.  If  Sheena makes it up three consecutive vines she will reach a nest of eggs.  The player can then choose an egg which will reveal a number which will be multiplied to the total Bonus win for extra points. 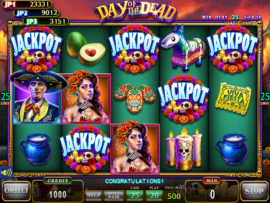 Day Of The Dead / 25 Line Game by IGS
Read more 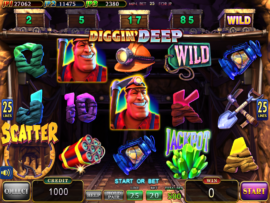 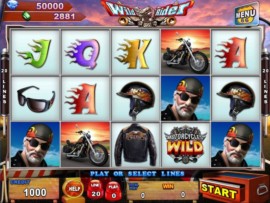